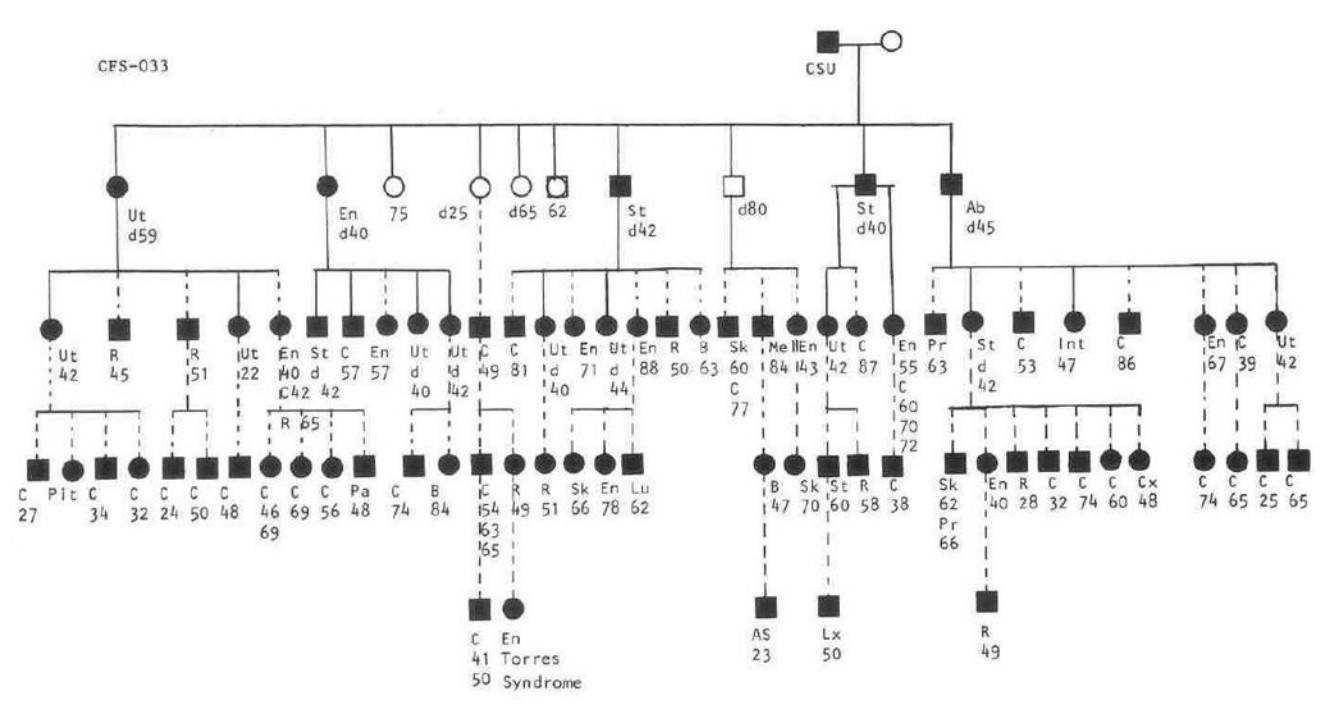 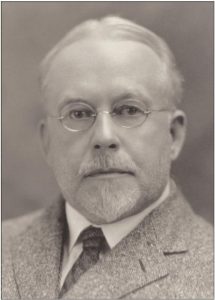 The story of Lynch syndrome began over 100 years ago, when Dr. Aldred Warthin, a pathologist at the University of Michigan, in Ann Arbor, reported the first family with the disease we now call Lynch Syndrome. In 1895, a woman who worked as his seamstress reported distress over the fact that many family members over several generations had succumbed to cancer, and she feared the same for herself. Indeed, she did develop endometrial cancer, and died of that disease as she predicted.

He undertook a “fairly complete survey” of the family, and created a pedigree, showing which family members had developed cancer, and their relationships. As the family had emigrated from Germany to Michigan before the Civil War; Warthin called them “Family G”. He found other families as well, which showed multiple occurrence of cancer. He published these findings in his seminal article in The Archives of Internal Medicine, 1913. 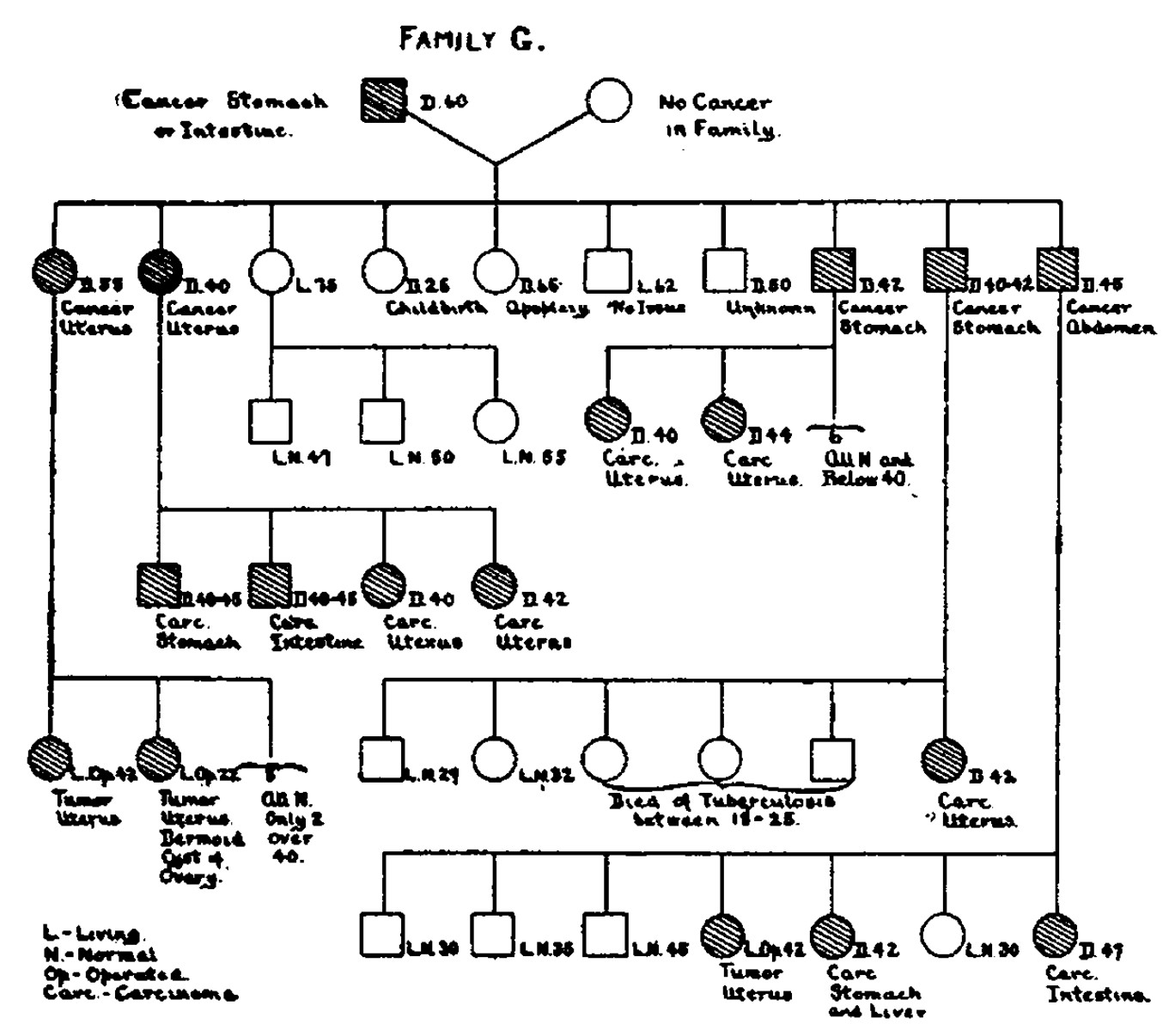 In 1925, Warthin wrote a further study of Cancer Family G. By now, he had concluded that the familial susceptibility to cancer was particularly true for carcinoma of the gastrointestinal tract and uterus. He recognized the early age of onset of the cancers, and suggested that the tumors might be occurring “at an earlier age in successive generations” – a phenomenon we now call anticipation. He also commented that his observations had been met “with little favor among surgical writers”. (Some things never change!)

Warthin died in 1931, but his colleagues issued a further report on the cancer family of Warthin in 1936. They continued to follow the family and accumulate data on these cancer families.

The story grew cold during the period from 1937 until the 1960s with occasional cases of this disease being reported from a variety of locations. This was until Dr. Henry Lynch met with a later generation of University of Michigan pathologists who reintroduced this family tree to him.

He found it similar to other families he had been following in Nebraska (Family N) since he was a second year medicine resident. He arranged for a family reunion near Ann Arbor, to learn more about this family. He conducted a detailed medical genetic investigation of the family, obtained data on >650 family members (among whom 95 had now developed cancers), and found a predominance of cancers of the colon, uterus and stomach. 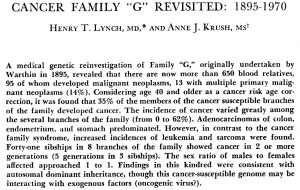 He published his findings in the iconic “Cancer Family ‘G’ Revisited” manuscript of 1971. He, once again noted, progeny of affected individuals continued to be at risk for early-onset cancers. He recognized the Autosomal dominant nature of inheritance. A variety of hypotheses were proposed to explain the disease, but the time for discovery of the basis of hereditary cancer had not yet arrived. He used the term “Cancer Family Syndrome” in this report.

Continued annotations of additional tumors over time, by Lynch, resulting in this circular pedigree of Family G

Dr. Lynch met a lot of skepticism as he presented a hereditary link, as at that time the focus was on the environment and its relationship with cancer. The strong consensus at that time was that the familial occurrences were due to similar carcinogen exposures.

However, this was not the final report on Cancer Family G. In 2005, Douglas et al. (from the University of Michigan) provided additional confirmatory follow-up of the family with data on 929 descendants of the original progenitor, and reported on the specific mutation in the MSH2 gene.

There is probably no other instance in which one family has contributed so much to the understanding of an important genetic disease such as this! 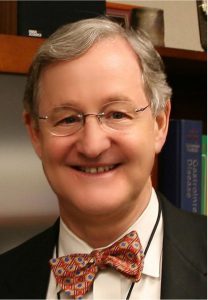 In 1973, C. Richard Boland, MD wrote a medical school thesis entitled “A Familial Cancer Syndrome”, recognizing the same disease. He noted that some families had a phenotype with only colorectal cancer (CRC), whereas other families had the characteristic non-colonic cancers, we now recognize in this disease.  He used the terms Lynch Syndrome I and II for the first time to distinguish those families with a CRC-only versus the full spectrum of cancers.

Interestingly, in 1985, Lynch first used the term Hereditary Non-polyposis Colorectal Cancer or HNPCC for this disease, which was the accepted term for many years. These two terms were often used interchangeably for years to come. This remained so until the genetic basis of the disease was discovered, and more importantly, the recognition that not all familial clusters of CRC represented one disease. 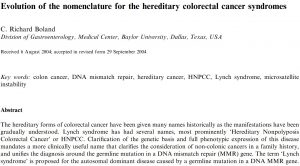 Finally in 2005, Richard Boland better described Lynch syndrome, that it should be applied to those cases in which the genetic basis can be confidently linked to a germline mutation in DNA mismatch repair (MMR) genes.

“Informed by knowledge of the genetic basis of the disease, and propelled by the development and validation of 2 powerful clinical identifiers (MSI and IHC), clinicians currently have an extraordinary body of useful information about Lynch Syndrome, which has permitted progress in the diagnosis and treatment of this disease. There is still far to go in our understanding of Lynch Syndrome and the management of patients with this disease, but the past 20 years would lead one to be very encouraged about what the next 20 will bring.” 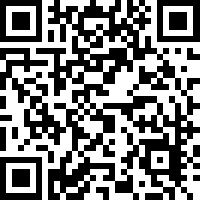 3 Responses to :
Anecdote on Lynch syndrome