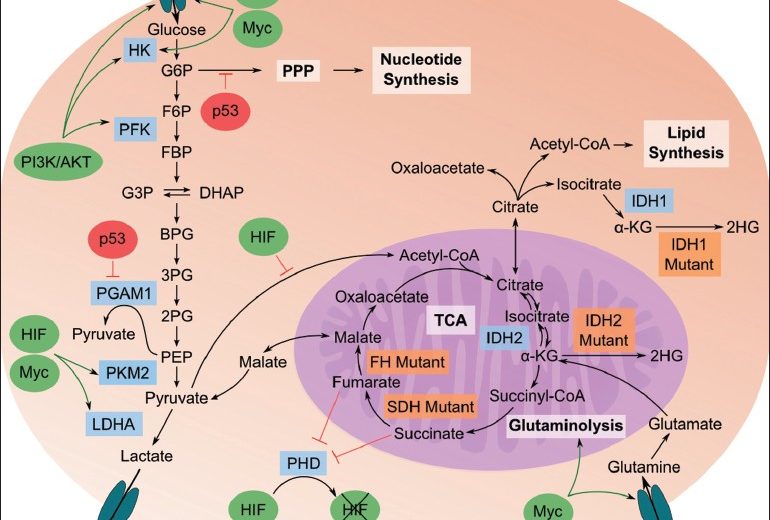 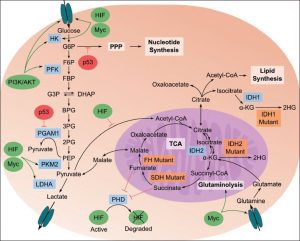 Cancer metabolism is one of the earliest and oldest areas of research in cancer biology. This is based on the principle that metabolic activities are altered in cancer cells relative to normal cells, which is essential for initiation & maintenance of malignant properties.  Cancer cells typically proliferate from one aberrant cell to more than 109 cells. To achieve and sustain that proliferative capacity, cancer cells must activate or enhance current metabolic pathways. These pathways use available nutrients to generate the metabolic precursors for cell anabolism, the increased energy demand, biosynthesis and to maintain the redox balance in the cell.

Glucose being the most abundant nutrient in the blood is the major contributor to the evolution of the metabolism of mammalian cells. Normally, most of the glucose is catabolized through glycolysis to pyruvate, which is transported to the mitochondria. In the mitochondria, pyruvate fuels tricarboxylic acid (TCA) cycle and electron transport chain (ETC), where oxidative phosphorylation takes place and provides energy in form of ATPs. The cancer cells paradoxically, convert much of the pyruvate into lactate, an extremely low energy yield and consequently cancer cells require high glucose consumption rate to satisfy its anabolic demands. A high rate of glucose catabolism into lactate is the most ubiquitous metabolic derangement seen across cancer cells and was first reported by Otto Warburg in 1956.

Glutamine is second most consumed nutrient after glucose and is the most important “nitrogen shuttle” in the blood. It brings the organic nitrogen to the cancer cells, in order to use it to make the essential amino acids and thus proteins required to make more cancer cells. Serine is the third most consumed metabolite by cancer cells and is converted into glycine through the activity of serine hydromethyltransferases (SHMT1 and SHMT2) and releases one-carbon unit to the one-carbon pool, which is utilized in the biosynthesis of thymidine monophosphate (dTMP) and purines,

Recently, mutations in three TCA cycle enzymes, succinate dehydrogenase (SDH), fumarate hydratase (FH), and isocitrate dehydrogenase (IDH), are seen as a causal role in carcinogenesis. In tumors associated with defects of SDH, FH, and IDH enzymes, the underlying mechanisms of tumorigenesis involve the accumulation of oncometabolites (succinate, fumarate, and (R)-2-HG) that convey oncogenic signals. E.g. It has been seen that high percentage of lower grade diffuse gliomas harbor mutations in the genes (IDH1 and IDH2).

To summarize, metabolic reprogramming is a major hallmark of cancer. These metabolic changes provide cancer cells with energy and vital metabolites to support large-scale biosynthesis, proliferation, and tumorigenesis processes and are currently being utilized for the development of novel targeted cancer therapies.

About the Author / Dr Anuj Parkash

Dr Anuj is experienced and trained MD Biochemist, working as consultant in the department of Pathology, RGCI&RC since 2015 with 10+ years of Post-MD experience . He is well experienced in reporting all Biochemistry and Immunoassays with special interest in Oncology chemistry.

One Response to :
Cancer and Metabolism